Watch just the first two minutes of the YouTube clip below.

Where and When Did Humans Evolve? | The Advanced Apes | PBS Digital Studios

Over millions of years, humans have evolved so that we each have developed certain characteristics that gave us a better chance of survival. Humans did not evolve from apes such as gorillas and chimps. Instead, humans and apes share a common ancestor that lived millions of years ago. This common ancestor evolved over time to form many different species of hominid, only one of which survived to become modern humans. Others became gorillas, orangutans and chimpanzees. All the rest of the hominids, including early forms of humans, became extinct.

In the image below, there are four different types of ‘human’ or ‘hominid’. Firstly, you’ll need to order the fossils into time order which will tell you where our species ‘began’ as such and ending with our current form ‘homo sapien’. *Hint* Look at the information about when they lived.

What do you notice about what happened to the size of ‘humans’ brains over time? Why might this be? 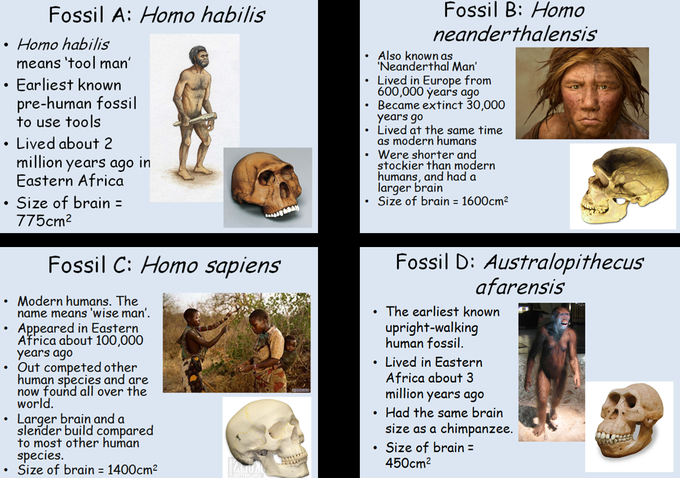 Some people think that humans have stopped evolving. Use the idea of natural selection to try and explain why they might say this. Do you agree?